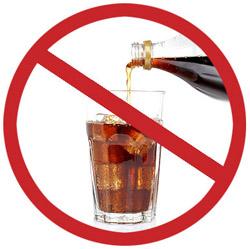 Do you want to be healthy? Drinking soda is bad for your health in so many ways; science can’t even state all the consequences. Here’s what happens in your body when you assault it with a Coke:

Within the first 10 minutes,10 teaspoons of sugar hit your system. This is 100 percent of your recommended daily intake, and the only reason you don’t vomit as a result of the overwhelming sweetness is because phosphoric acid cuts the flavor.

Within 20 minutes, your blood sugar spikes, and your liver responds to the resulting insulin burst by turning massive amounts of sugar into fat.

Within 40 minutes, caffeine absorption is complete; your pupils dilate, your blood pressure rises, and your livers dumps more sugar into your bloodstream.

Around 45 minutes, your body increases dopamine production, which stimulates the pleasure centers of your brain – a physically identical response to that of heroin, by the way.

After 60 minutes, you’ll start to have a sugar crash.

How many sodas have you had today? How about your kids? As of 2005, white bread was dethroned as the number one source of calories in the American diet, being replaced by soft drinks.

The average American drinks more than 60 gallons of soft drinks each year, but before you grab that next can of soda, consider this: one can of soda has about 10 teaspoons of sugar, 150 calories, 30 to 55 mg of caffeine, and is loaded with artificial food colors and sulphites. Not to mention the fact that it’s also your largest source of dangerous high-fructose modified corn syrup.

Let’s take a look at some of the other major components of a can of soda:

Clearly, the over-consumption of sodas and sweet drinks is one of the leading causes fueling the world-wide obesity epidemic.

One independent, peer-reviewed study published in the British medical journal The Lancet demonstrated a strong link between soda consumption and childhood obesity.  They found that 12-year-olds who drank soft drinks regularly were more likely to be overweight than those who didn’t. In fact, for each additional daily serving of sugar-sweetened soft drink consumed during the nearly two-year study, the risk of obesity jumped by 60 percent.

Here’s another sobering fact if you’re struggling with weight issues: Just one extra can of soda per day can add as much as 15 poundsto your weight over the course of a single year!

Other statistics on the health dangers of soft drinks include:

If you are still drinking soda, stopping the habit is an easy way to improve your health. Pure water is a much better choice, or if you must drink a carbonated beverage, try sparkling mineral water with a squirt of lime or lemon juice.

There is absolutely NO REASON your kids should ever drink soda. None, nada, zip, zero. No excuses. The elimination of soft drinks is one of the most crucial factors to deal with many of the health problems you or your children suffer.

If you struggle with an addiction to soda, (remember, sugar is actually more addictive than cocaine!) I strongly recommend you consider Turbo Tapping as a simple yet highly effective tool to help you stop this health-sucking habit. Turbo Tapping is a simple and clever use of the Emotional Freedom Technique, designed to resolve many aspects of an issue in a concentrated period of time.

I am a Chiropractic Wellness Consultant in NW Portland, OR, in the heart of the Pearl district in Portland. I focus on prevention and am extremely passionate about taking care of the young before damage occurs. I utilize numerous technologies in the field of Chiropractic such as Thermography, Electromyography, Heart Rate Variability, B.E.S.T. KST which enable me to help people with chronic pain, learning disorders, ADHD, allergies, injuries, depression, anxiety and other ailments that are caused by having vertebral subluxation
View all posts by Dr. Marina Zaré →
This entry was posted in Wellness and tagged addiction, anger, cancer, children, chiropractic, chiropractor, coke, depression, diabetes, disease, drugs, eating, emotions, exercise, food, food allergies, headaches, healing, leukemia, nutrition, obesity, portland chiropractor, soda, stress, weight loss, wellness. Bookmark the permalink.