Have you heard of Auriculotherapy?

Have you heard of auriculotherapy and all of the wonderful things it can do?  Based on principles of Chinese acupuncture, Dr. Marina stimulates certain points in your ear to help with a variety of health concerns such as arthritis, addictions, weight loss, multiple sclerosis, back and neck pain, nausea, high blood pressure, and virtually any other health concern you can think of! 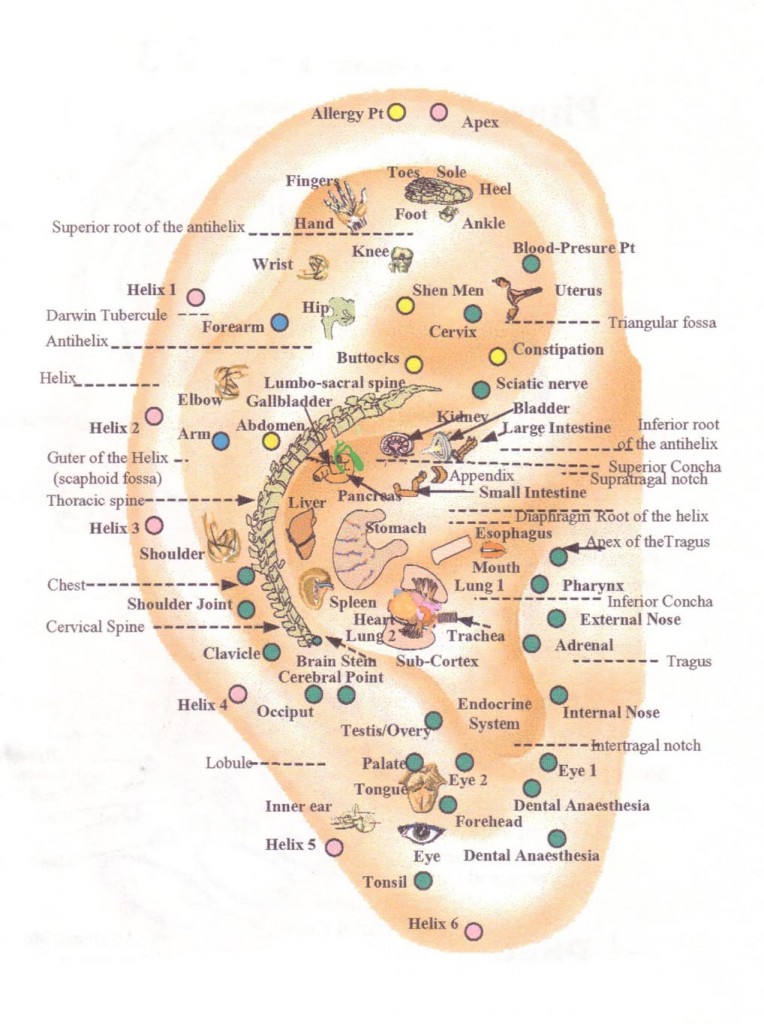 How is Auriculotherapy different from Acupuncture?
Auriculotherapy is typically considered one form of acupuncture, but there are both differences and similarities between the two procedures. Acupuncture is a form of medical treatment involving the stimulation of acupuncture points located on energy channels extending over the surface of the body, which are known as meridians. From the philosophy of Taoism, there are six Yang meridians and six Yin meridians. In classical acupuncture, it is the Yang meridians that directly connect to the external ear. These energy lines of force are blocked or congested when there is some pathology in a specific area of the body. Insertion of acupuncture needles into specific acupoints can relieve the symptoms and underlying pathology of a particular health problem. Some of the meridian energy lines of force connect to the external ear, thus creating the field of auricular acupuncture. Different perspectives of auriculotherapy focus not on the acupuncture meridians but on the use of the ear as a localized reflex system connected to the central nervous system.

What is the History of Auriculotherapy?
The earliest written records of ear acupuncture date back to the Yellow Emperor’s Classic of Internal Medicine, a compilation of acupuncture procedures that were in practice in 500 BC. Within this extensive text that covers a variety of acupuncture treatments, there is mention of specific acupuncture points on the external ear for the relief of certain medical disorders. However, the manner in which auricular acupuncture is practiced today in China is actually based upon more recent discoveries that occurred in France in the 1950’s. The Traditional Oriental Medicine practiced in ancient China included just a scattered array of acupoints on the auricle for just a few health problems, whereas the current practice of auricular acupuncture shows a more complete organization of ear reflex points that can be used to relieve many health problems. In the West, the earliest references to ear treatments were referred to in medical records from ancient Egypt, Greece, and Rome. The most complete descriptions of medical treatments through the ear were recorded in ancient Persia. A trail of evidence of the use of auricular stimulation for the treatment of sciatica back pain can be followed from these Persian records through medieval Europe to modern France. Since the 1950’s, the use of specific ear points as a complete reflex system that can alleviate many health problems has been utilized by clinical practitioners in other parts of Europe, in Asia, and in North and South America.

I am a Chiropractic Wellness Consultant in NW Portland, OR, in the heart of the Pearl district in Portland. I focus on prevention and am extremely passionate about taking care of the young before damage occurs. I utilize numerous technologies in the field of Chiropractic such as Thermography, Electromyography, Heart Rate Variability, B.E.S.T. KST which enable me to help people with chronic pain, learning disorders, ADHD, allergies, injuries, depression, anxiety and other ailments that are caused by having vertebral subluxation
View all posts by Dr. Marina Zaré →
This entry was posted in Wellness and tagged acupressure, acupuncture, addiction, chiropractic, chiropractor, depression, disease, drugs, emotions, high blood pressure, laser, nausea, portland chiropractor, quit smoking, stress, weight loss, wellness. Bookmark the permalink.